This post is just in case your memory has gotten a bit fuzzy on what’s happened so far in the Otherworld series but you don’t have time to re-read it before Wings of Ruin releases on June 30, 2020. Here’s a recap of the series with the aid of gifs! (Don’t worry, although it’s a timeline walk-through of the trilogy I tried to make things vague enough to avoid ruining things for new readers, but pointed enough to help jog the memory of those who’ve already read them. No spoilers for Wings of Ruin in this post! Only things already mentioned in the other two books). Don’t read this post if you haven’t read Crooked Raven or Carrion Crow yet and don’t want to risk exposure to potential mild spoilers. 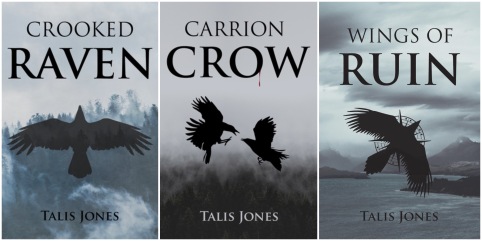 Twins are born! With a pretty intense prophecy… So Titus splits up the twins by space and time to protect Oneiroi.

Cassandra dies, turns Whisper, stirs up trouble, and sets the prophecy into motion.

Then things do go as planned!

Then we’re back to things going awry…

Oh wait! Everything is good again!

Geoffrey dies and turns Whisper while towing along his foster sister Adrianna but Geoffrey and Adri get split up when, uh, Sarai kidnaps Adri thinking she’s a Whisper. Geoffrey vows to rescue his sister.

Adri and Sarai become unexpected friends. Sarai’s campaign to overthrow the evil Crown Dismas with her growing rebel army is under way and Adri and Sarai go on a quest to find Dismas’ brother (Could he be leverage? Used for intel?) and gain alliances from neighboring regions.

Yet another Whisper, Sa, joins Sarai’s road trip group and she totally ships Jack and Adri.

Sarai’s rebel army overthrows Dismas and she becomes the new Crown but some people die, some are banished, and some are imprisoned. Basically, the promised “Happily Ever After” has been postponed.

Geoffrey/Eisen has become Dismas’ apprentice, gained powerful magic, aged to the cusp of adulthood, but Adri isn’t free yet so he renews his vow of revenge.

Oh hey! An evil should-be-dead sorceress is back in the game! More people die, some flee, some stay…

Eisen forms his own rebel army to overthrow the Crown and rescue Adri.

Jack and Adri are separated so he doesn’t die and she can turn spy.

Titus shares the prophecy with its cast and the only person concerned is Adri.

Adri’s spy days are over and she gets put on the Crown’s enemy list.

Whispers, rebels, soldiers, etc. battle it out. More people die. Oneiroi’s prophesied fate hangs in the balance, people are betrayed, Eisen is too late. ‘Tis a day of victory and grief. Things were sad and now they’re not but then they are again.

But ultimately Oneiroi is gonna be a-okay.

So that’s it! Mostly anyway…hehe. The release of Wings of Ruin is almost upon us! I hope you’re feeling as excited as I am!