This month’s big holiday was Valentine’s Day and while I don’t really do anything to celebrate (besides take advantage of all the chocolate for sale) I couldn’t resist teasing my characters by putting together fun scenarios. I shared them on Facebook for the holiday but in case you missed it and want a little laugh I’ll post them here. 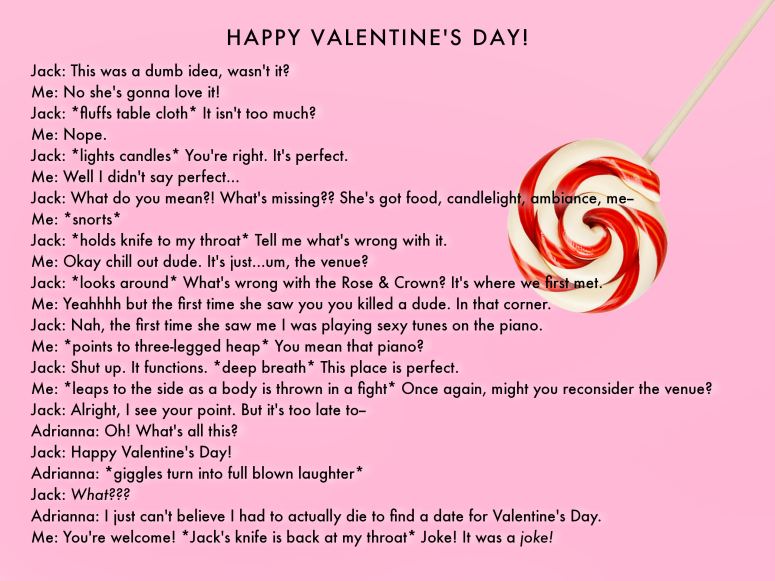 In bookish news… Carrion Crow is ready for publication in March! I work really hard to stay on schedule for you all and I’m relieved to say that it is finished and waiting for March 26th to arrive in your mailbox (or on your Kindle). We get more POVs, darker promises, and a finale to the prophecy at last. Just a reminder that although I call this a trilogy, the third and final book is really more of a prequel/villain backstory. If she intrigues you as much as she did me while writing her then you’ll understand why I had to include her origin story in the series.

Add to your Goodreads here!

While I waited for my beta readers to finish with Carrion Crow I was already busy crafting an outline for book 3, Wings of Ruin, and even started the writing. But after going through those final edits for Carrion Crow I realized I needed to pause my writing and go back and rework the plot outline for Wings of Ruin a bit. But it’s for the better! I promise! That’s the thing though with series, each change in one book affects the story in the other. Don’t worry, I’m still working hard to have it out by October of this year.

For those of you who check my “Coming Soon” page to track my writing progress you might have noticed a new title listed. Surprise! I’ve officially decided to write a novella set in the Walking Shadows world! Titled Dust to Dust it follows Fury and Riker during that 3 year gap in Alarum. For the original book I felt like it took away from the story’s momentum (hence the time jump) and while it remains a good idea to have cut it for time the characters got into people’s heads. Several people have asked questions and I’ve got answers that need sharing so a novella is in order! Later on I might even release a special edition of Alarum that includes the novella…we’ll just have to wait and see. But I’m so excited about this and have already begun writing it! And since this is a novella it has no official release date meaning that once it’s done, formatted, and wrapped in a cover, then I’ll be sending it straight to Amazon for you to enjoy!

In personal news… After a lot of thinking, consulting, and testing, I’ve decided to go through with TICL surgery which will correct my vision and allow me to roam the planet unafraid of tripping and losing my glasses down an abyss haha. I have a dreadful eye phobia though so it’s going to be the hardest thing I’ve ever put myself through. Needless to say prayers are welcome!! Part 1 (lasers) will be in March before the official surgery which will be in April. It may mean I’m on the computer a bit less around those weeks but I’ll try not to let it slow down my writing too much or to delay any book promo or releases, however if it does then please have some grace and forgiveness. But fingers crossed everything goes smoothly and for quick healing. ❤️

Hopefully you’re excited for Carrion Crow though because March is promo month! Follow my social medias to be sure not to miss out!

King of Scars
by Leigh Bardugo
YA Fiction | Fantasy

Leigh Bardugo is currently one of my favorite authors. She’s hilarious and incredibly friendly in person not to mention when it comes to writing she is a fantasy QUEEN! Her Six of Crows duology is a personal favorite and I was excited to dive back into the Grishaverse with this new duology. Overall it was dark, gritty, and fantastical (plus I’ve loved Nikolai since we first met him in Siege and Storm!) but I remain torn on how I feel about the twist at the end… Guess we’ll just have to wait and see what book 2 brings!
(click the book cover to read the description)

Okay so the husband of a good friend is in the band and maybe I’m a bit biased but I don’t really think so. I’ve been listening to their album on repeat ever since it released in January and I’m not yet bored with their folksy-rock-ethereal-gritty vibe. Definitely check them out when you get a chance!